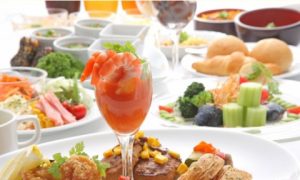 European cuisine , it varies markedly depending on the country, common to European cuisine is an abundance of meat and vegetable dishes, as well as the secondary role of different seasonings and sauces.
East cuisine – the basis of the food make lamb and rice, which is a mixture of dry forms pilaf and liquid Shurpa. The peculiarity of Oriental cuisine is the lack of soups in the European sense.
Menu