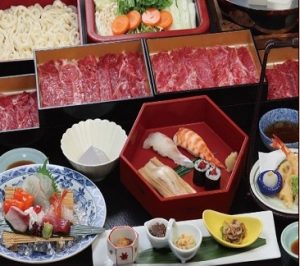 Shabu-shabu – in this dish include thinly sliced ​​meat and vegetables, which is served sauce for dipping. Traditionally, this dish was added thinly sliced ​​beef, but a modern version may contain pork, crab meat, chicken, duck or lobster meat. The dish is usually served with tofu and vegetables such as Chinese cabbage, chrysanthemum, nori, onions, carrots, shiitake mushrooms and enoki mushrooms. Thinly sliced ​​pieces of meat or vegetables dipped in boiling water, from which they emerge with a characteristic sound. It is because of this sound dish called shabu-shabu.