Shinagawa (品 川) – the name refers to both the District of Tokyo, as well as one of the w / d station of the city. Shinagawa Station – one of the largest transport hubs in the capital, around the station so concentrated a large number of business centers, restaurants, hotels and shops.Even in the Edo period (1603-1867 ..) Shinagawa was the main transit point for travelers to follow the route Tokyo-Kyoto. 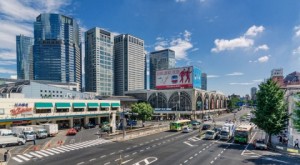 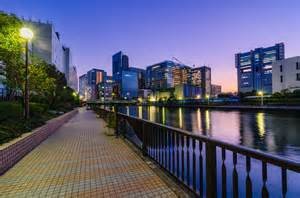 The station incorporates a variety of lines, such as the JR Yamanote line and the Tokaido Shinkansen. At Keikyu Railways trains and Narita Express, you can get to the airport, Haneda and Narita, respectively. Shinagawa train tracks leading to many major cities of Japan, not to mention the fact that the station you can get to all the major areas of Tokyo.
From Shinagawa station has two exits: the western – and eastern Takanawa – Conan.

The area around the exit of Conan is not so global reconstruction was carried out for a long time. Here, a large number of business centers and many companies to move their headquarters to this part of the region. Now the office area meets all the needs and requirements of employees: in every heart the first few floors occupied by shops and cafes, a separate space is reserved for small urban gardens, where staff can relax during the lunch break.

On the output side Takanawa are numerous hotels, including large chain hotels Prince Hotel. It also houses several large shopping mall, one of which – Shinagawa Prince Hotel is complex – in addition to the shops and boutiques There are several cinemas, a bowling alley and a largeaquarium the Aqua Stadium then the Epson . The aquarium contains a large variety of fish and other underwater creatures, dolphins and live shows on a regular basis. 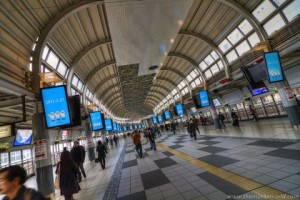 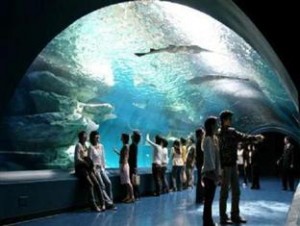 Interestingly, the “hotel” was the Shinagawa area for a long time. At the beginning of XVII century it was built the road that connected the city of Edo (old Tokyo title) and Kyoto. The road passed through the then City Shinagawa, which began to develop rapidly after the opening of a new route. Later Shinagawa became the first of the so-called “postal cities”, where travelers could find lodging, food.

Over time, it becomes part of Shinagawa Tokyo and became a district. Typical features of urban village soon changed the appearance of “postal cities”, however, some old churches and other attractions have survived (near the temple Ebara information center is located). The same applies to the old Tokaido route by which it is now possible to pass on sinsansene.

In the south-west from the station is Gallery of Modern Fine Arts Museum then Hara . Once the museum building was privately owned, but the businessman Hara Kunizo gave it to the city. The gallery presents interesting examples of contemporary art, visitors can also buy souvenirs in the small shop at the museum and have a snack in the cafe. In the gallery there is a small branch of the Hara, known as Hara Museum ARC, in the town of Ikaho, Gunma Prefecture.

For those interested in a more gastronomic routes, rather than historical, we can recommend two Japanese restaurant located near Shinagawa Station. Shinatatsu Ramen cafe chain offers dishes from traditional Japanese ramen noodles and a small culinary shop Shinatatsu Donburi can try donburi – a rice dish that is served with a variety of toppings. 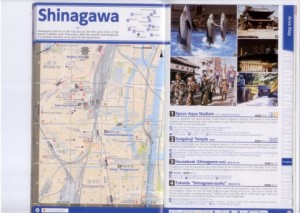