Meiji Shrine (明治神宮, Meiji Jingū) – the largest Shinto shrine in Tokyo, dedicated to Emperor Meiji and his wife – Empress Sёken. The temple was built in 1920, 8 years after the emperor’s death, and 6 years after the death of the Empress. During World War II the building was destroyed, but soon after the establishment of peace rebuilt. 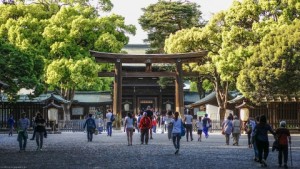 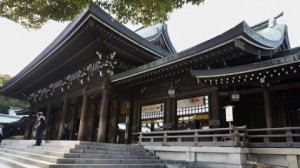 Emperor Meiji, when life known as Mutsuhito, played an important role in the formation of the Japanese nation-state of modern times. In the so-called Meiji Japan moved from Samurai to the imperial system of government, which led to the formation of a new, modern state: from an agrarian, closed and once backward country was born the modern Japan, which opened its doors to the achievements of Western civilization.The changes affected areas of life such as education, religion, industry, diplomacy. The complex of military, political and socio-economic reforms that took place during the reign of Mutsuhito, called “Meiji Restoration.” After the emperor’s death in 1912, Parliament had decided to perpetuate the role Mutsuhito in the “Restoration” So on the garden where during his life loved to visit the imperial couple, was built Meiji Shrine.

The center of the temple complex is a 10-minute walk from the south entrance to Yoyogi Park, near Harajuku station, or from the north entrance next to Yoyogi station. Passing through the big gate Torii, visitors find themselves on an island of peace and tranquility, cut off from the hustle and bustle. The forest around the Meiji Shrine was planted even during the construction of the temple complex – Each of the 100 000 trees here – a gift of this or that region of Japan. 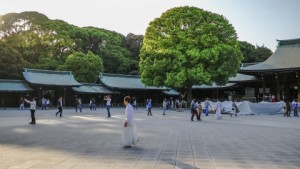 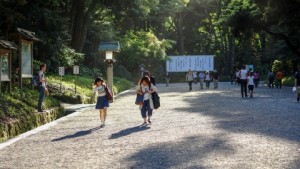 In the heart of the forest thicket, in the temple, peace reigns atmosphere, very unusual for a large city like Tokyo. It is not surprising that the Meiji Shrine is one of the most popular in the country. In the New Year holidays here comes more than 3 million people (this is the Japanese tradition – hatsumode – visit the temple in the early days of the new year), which is an absolute record. And throughout the rest of the year in the temple often hosts traditional Shinto wedding.

In the northern part of the temple complex is the Meiji Treasury, which was built a year later after the main building. It preserves many personal belongings of the Emperor and Empress, including the coach, in which the emperor went to the ceremony of the official proclamation of the Meiji Constitution in 1889. Also here is a museum, which often hosts special exhibitions.

Most of the southern territory of the complex is the inner garden, the entrance to which must be paid separately. The garden is very popular in June, when the season comes irises bloom. There is also a small pond, named in honor of a military commander – Kiyomasa. It often came to Emperor Meiji and his wife – so it is believed that this place is characterized by a special spiritual energy.

Opening hours:
From 9:00 to 16:30 (or until 16:00 from November to February)
Entrance closes 30 minutes after the official closing time. Closed: no day off (additional facilities) on weekdays (main building) Price: 500 yen

Opening hours:
From 9:00 to 16:30 (or until 16:00 from November to February)
Entrance closes 30 minutes after the official closing time.
In mid-June, the time can be increased. Closed: Operates seven days a week Price:  500 yen.