The island of Odaiba.

Odaiba – a large artificial island in Tokyo Bay. It was originally built in 1851 by order of the Tokugawa Shogunate, and is a complex of 6 fortresses that can protect Tokyo from attack by sea. Daiba in Japanese means “cannon placed on the islands.” A modern reconstruction of the island began after Tsukaba was chosen the center of Expo ’85. The Japanese economy at that time was at its peak, and the island was supposed to be an illustration of the Japanese miracle. But after 1991 (the “burst bubble”), and until 1995 for the building of Odaiba plans were frozen.
At the end of the 1990s, the area began to gain popularity among Tokyo people: on the territory of Odaiba were first shopping centers, hotels, business centers, then the largest companies began to carry here their headquarters, for example, Fuji Television. In 2002, the beginning of a new job w / d Rinkai line, and a few years Yurikamome train started to run to the station Toёsu. So there was a modern district. Odaiba – the center of leisure and entertainment, popular among both Japanese and foreign tourists. 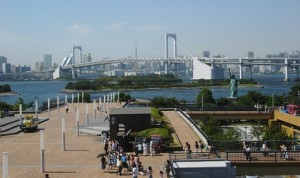 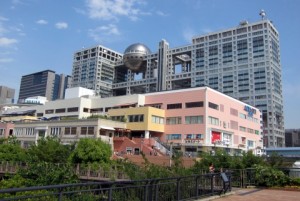 The main attractions of Odaiba: 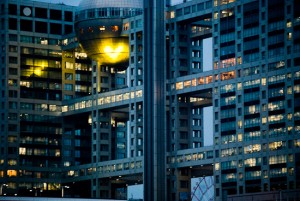 This television headquarters Fuji, one of the largest national TV stations of the country. You will be able to see some scenery popular programs, buy gifts in the shop and go to the observation deck. 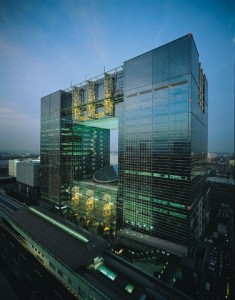 Communications Center – the main focus of the information superhighways. On the upper floors there is a viewing platform, which offers a beautiful view of the surrounding area so a good day even seen g.Fudzi. 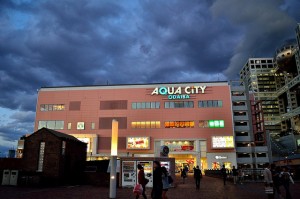 Aquacity – shopping mall with a great selection of shops, restaurants and cafes, not to mention meet the latest requirements of the art movie theater. On the wooden deck in front of Aquacity and neighboring Decks beautiful views of the Rainbow Bridge. 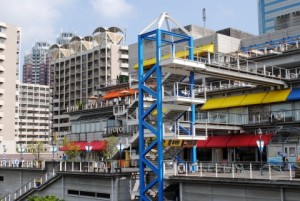 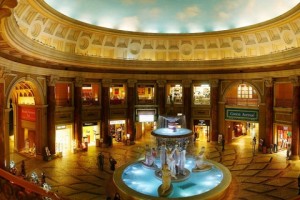 The shopping center is located more than one hundred shops, cafes and restaurants. The interior of the center bears the features of southern European cities of the 18th century. 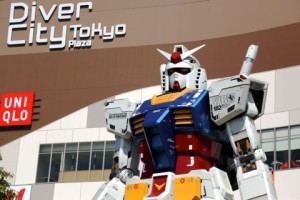 This is a new shopping center, which opened its doors in April 2012.
The main attraction of the center of the statue of Gundam anime “Life sized”. 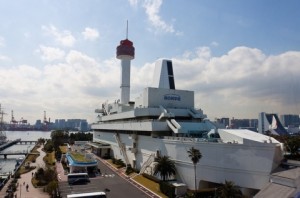 The museum looks like a large cruise ship moored to the quay of. Odaiba. The main building with exhibits on the history and technology of ships and shipping is currently closed for renovation. Just next to the museum are always two of these spacecraft. 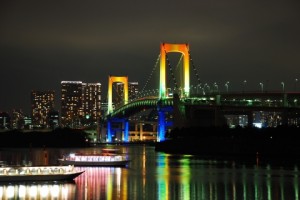 Rainbow Bridge, or Rainbow bridge, serves as a buffer between Odaiba and the rest of Tokyo. A two-storey bridge is a symbol of the Gulf and especially beautiful at night with night lighting.
The bridge located speed, regular road, Yurikamome line and footpaths on both sides. 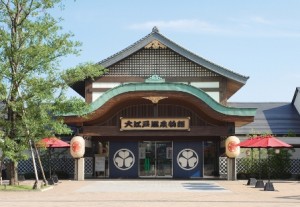 Oedo Onsen Monogatari – onsen, or how it can be described in the European manner Japanese “spa” was opened in 2003. Interior design onsena impregnated atmsferoy Edo period – with typical baths and springs. It offers the best massage and treatment rooms, visitors also have the chance to dine in an excellent restaurant at the onsen. 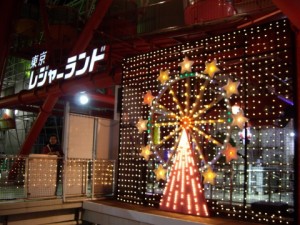 A huge entertainment complex, where you can play bowling, slot machines, table tennis, participate in karaoke and much more.

The complex also has a ninja house and a haunted house.

11. The National Development Museum of Science and Innovation . 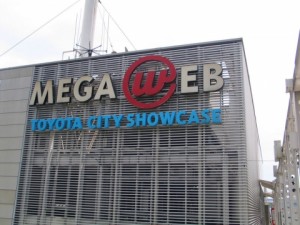 Inside, Toyota showcased the latest models of cars, accessories, as well as the latest developments and technologies.
In the museum you can see Toyota cars from past decades. 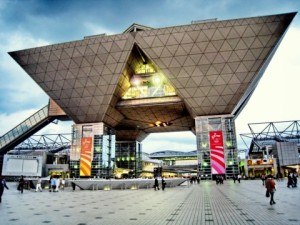 A wide range of activities carried out in the Big Sight throughout the year, including the Tokyo International Anime exhibition and the Tokyo Motor Show. 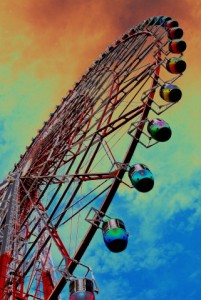 The height of the Ferris wheel 115 meters. It is one of the largest in the world. Since it offers a good view of Tokyo Bay and the island of Odaiba in general. Each cabin for 6 persons, a full turn of the wheel takes about 15 minutes. 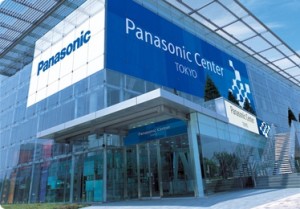 Panasonic Center – Exhibition Hall of the newest products and technologies provided by Panasonic Corporation. The exhibition presents the latest televisions, computers, games, home appliances and more. On the third floor is the Museum of Natural Sciences.

Yurikamome is an automated driverless train, which connects Shimbashi Station on the Yamanote Line and Toyosu Station on the Yurakucho Subway Line. Trains depart every few minutes, and the journey between Shimbashi Station and Daiba Station takes 15 minutes and costs 310 yap.yen.
On the way to the train o.Odayba Yurikamome crosses Rainbow Bridge, offering beautiful views of the harbor and waterfront of Tokyo.

Rinkai Line connects Osaki Station (JR Yamanote Line) from Shin-Kiba Station (JR Keiyo Line ) stopping at Tokyo Teleport and Kokusai Tenjijo stations.
The trip from Shinjuku to Tokyo Teleport Station on about. Odaiba takes 25 minutes and costs 480 Jap. yen. Note that the Japan Rail Pass, Seishun 18 Kippu and similar JR tickets are not valid on the Rinkai Line between Osaki Station and Shin-Kiba, although the line is served by JR trains.

Tokyo water taxi departs from Odaiba Seaside Park station to Hinode Pier (20 minutes on the road, the cost – 460 yap.yen). Also on the water taxi to Odaiba can be reached from Asakusa (on the road – 50 minutes, the price – 1520 yap.yen).

Details about the water taxis in Tokyo can be found  here. 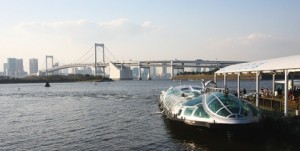 You can take a walk on the Rainbow Bridge. The walk will take about 30-45 minutes. From Rainbow Bridge with beautiful views of the surrounding area and the waterfront.
A pedestrian path starts in a few minutes walk from Shibaura-futo Station. Bicycles on the bridge are not allowed.
Please note that the footpaths are closed from 21:00 to 9:00 am from April to October; from 18:00 to 10:00 from November to March, and the third Monday of each month. 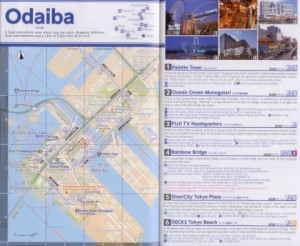