Kabuki (歌舞伎) – a form of theatrical art, whose history dates back to the Edo period. Along with Kabuki and Bunraku is considered one of the main types of classical Japanese theater.

One of the distinguishing features of kabuki is the glamor and brightness: the first thing that attracts the attention of the viewer, is a lush costumes, eye-catching make-up of actors, high wigs. Acting also differs over giperbolizirovannostyu – because facial expressions and gestures of the actor must convey the meaning inherent in the scene. This is particularly important, as they often performed the play in Old Japanese, little understood, even for the Japanese themselves. 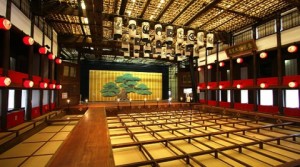 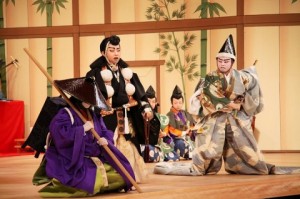 In order to attract the viewer’s attention even more, the special techniques used in kabuki performances. One of them – a long platform, passing through the auditorium to the very door: he needed to create the effect of surprise at the appearance of a character on stage. In addition, a special atmosphere is created by music: performing a live orchestra playing traditional musical instruments.

As for the plot, often executed plays based on historical events, or disclose certain moral conflicts, depict dramatic love stories, etc .. A full performance of kabuki, usually consists of three or four parts (the individual, the most popular episodes of different pieces), which in turn are divided into acts. Between the parts are arranged long intermissions, so one idea can last from four hours. The alternative – to buy a ticket only on one part of the performance, or even to a specific act. In this case, tickets are on sale on the day of submission – but be prepared for the fact that during the performance have to stand. Also, tickets for some parts of the play are more expensive than others – so you should specify the price.

When the Kabuki theater in its infancy, all the roles in the plays were performed only by women, and the performances themselves were popular among the peasants greater than the aristocracy. But in the Edo period was a ban on the participation of women in the submissions, and since then all the roles in the men perform kabuki. Actors, specializing in female roles, called “onnagata”.

What else can surprise the inexperienced viewer – so it’s frequent appearances during the performance of people in black suits. It’s not the actors and assistants “kurogo”, the task of which is to support: they change the scenery, the actors served the necessary props, etc ..

You can also hear quite often as during the presentation of the hall shouting the names of the actors on the stage, which can be regarded as applause.

As for the dress code, on presentation of Kabuki necessarily come in evening dress, but do not forget about the appropriate manners.Sometimes you can see the premiere performance of the spectators, dressed in a traditional kimono.

In Japan, still preserved theaters, which are the real performances of kabuki. One of these theaters – Kabukiza located in the Ginza district.Kabukiza was founded in 1889 as a journalist and playwright Fukuti Genitiro. Later, in 1914, it became the property of Kabukiza Shochiku Corp., which still remains the principal owner of the theater. 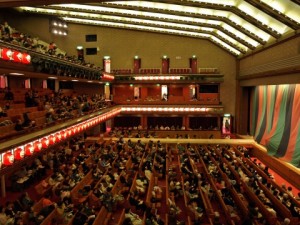 Throughout century Kabukiza reconstructed several times – often because of the fires – and the last renovation took place in 2010. March 27, 2013, the opening ceremony of the new building. The modern building combines the features of a classic, Oriental Theatre, and features western style.