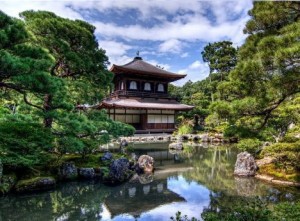 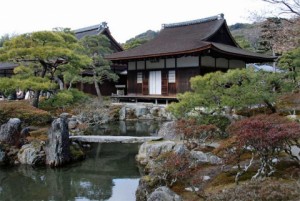 In its layout and architecture Ginkakudzi – a copy of the famous Kinkakuji, or Golden Pavilion, in Kitayama, who built Yosimasa ancestor. It is believed that the original plan Ginkakudzi had to be covered with a layer of silver, after which it was named. However, silver’s plan was never implemented. It is assumed that the present form of the temple corresponds exactly to what it was in the days of Yosimasa. Being unfinished, Silver Pavilion reflects the philosophy of Wabi-sabi – the Japanese aesthetic philosophy, according to which the real beauty is hidden in everything imperfect. According to another view, Ginkakudzi called the “Silver Pavilion” because as the moonlight reflected from the dark night of the walls of the temple and creates a silvery glow around him.

Temple Ginkakudzi includes Silver Pavilion itself, as well as dozens of other temple buildings and wonderful gardens. 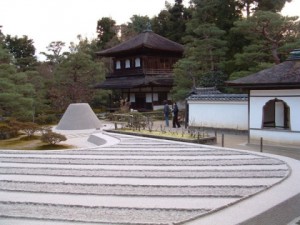 The first thing that opens eyes of visitors – a two-storey Silver Pavilion, formerly called Kannonden or Hall of Kannon. Each floor is decorated in a particular architectural style. Inside the building, on the second floor, there is a statue of the goddess of mercy Kannon, which, however, can not be seen – the Pavilion is closed to the public.
A little further is the dry garden of sand and gravel – lined rake the sand in the moonlight like silvery sea. Next to the garden is Hondo room with beautiful painted doors, but the room is also closed to visits.

The only building in the entire property, which remained completely unchanged (apart from the Silver Pavilion) – a temple Togudo, in the hall where the Shogun to hold business meetings. This room – a sample of ancient architectural style Shoin, which often decorate modern Japanese home with tatami.