Area Caves five lakes – Narusawa, Fugaku and Saiko – emerged in the year 864 as a result of a volcanic eruption. The hot gases and molten lava flowing underground, promoted the formation of specific voids – lava channels. Gradually, the lava cooled and formed a solid, monolithic korka.Na Currently caves open to the public, and the most popular ones – Narusawa Ice Cave and Cave of Bats Saiko. 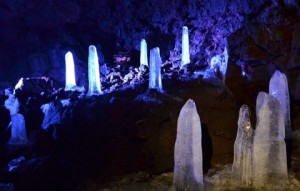 Narusawa – Ice Cave , where throughout the year the temperature does not rise above 0, so that even in the middle of the summer, visitors can see a block of ice. Walk through a relatively small cave (its length is 153 m) takes about 10 minutes.

Ice cave is formed in a natural way: through the cracks in the rock inside accumulates water from underground sources. In winter, the water freezes, resulting in and formed large ice stalagmites and stalactites, some of which reach up to 27 meters long and several meters wide.

Going into the cave, be extremely careful steps fairly wet and slippery, but throughout the path, you can rely on solid bamboo railings. The ceilings are quite low, so be prepared that you have to bend frequently. 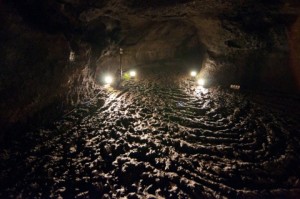 Saiko – or bat cave – the largest of the three caves, in length of 350 meters. Throughout the year, the temperature here does not fall below 0, the winter is relatively warm, in connection with which the cave at the time became a refuge for entire colonies of bats. Unfortunately, as a result of the negative human impact on the environment, the population of bats has declined sharply. Now we make every possible effort to revive the colony. 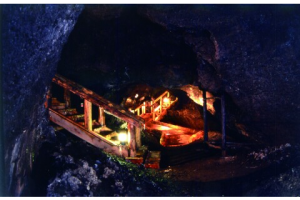 Fugaku ( “Cave of the Winds”) – lava cave, the temperature in which, as in the Ice Cave, is stored at 0 or omitted below. At the time, Fugaku cave was used as a natural ice and store a variety of products – within the preserved wooden shelving for storage. Inside the cave you will see stalactites and rock lava – the result of a volcanic eruption 864 years.