Okinawa – one of the 47 Japanese prefectures representing the island chain, forming the Ryukyu archipelago. The name of the archipelago refers to the XIV century, when the state of the Ryukyu island existed – the kingdom, located in the vassal state of China. Later Ryukyu was captured by the Japanese samurai, and in 1872 the state was formally annexed to Japan and renamed the prefecture of Okinawa.

During World War II, Okinawa was hit hard – “Battle of Okinawa” has led to catastrophic casualties on the Japanese side. Subsequently, the prefecture was occupied by US troops until 1972, now located on the island of the US military base.

The largest island of the group bears the same name as the prefecture – Okinawa and Japanese «沖 縄 県» – «Okinawa-hontō». Here is the capital of the Prefecture – the city of Naha, – with which, as a rule, and begins the journey to the islands of the archipelago.

The climate is subtropical Okinawa, which implies clear weather in the summer, but also ensures high humidity. However, the most beautiful beaches of the archipelago with coral reefs and diverse marine fauna with more than compensate for this. In summer, the prefecture of the island attract a lot of beach lovers, as well as diving and snorkelling. The number of foreign tourists coming to Okinawa, is also large, and their number is increasing every year. It is not recommended to visit Okinawa during the period from May to June, as at this time the rainy season passes.

With regard to culture and identity, Okinawans take themselves apart from the rest of Japan, and have their own language, however, it is common mostly among the elderly. In view of the long American influence, Okinawa culture is a wonderful blend of east and west. However, life on Okinawa Islands retained the old leisurely and measured, in addition it is considered that it is in Okinawa is home to the largest number of Japanese centenarians. 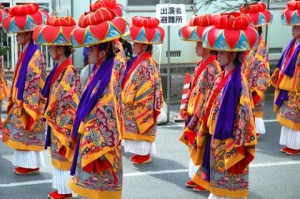 Kitchen Okinawa, which carries the clear signs of the influence of Taiwanese, Chinese and American cuisines, is also different from Japanese cuisine in general. One of the favorite dishes of the residents of the prefecture – Champuru – is a kind of salad, vegetables, tofu, eggs and pork slices. Not less popular taco rice – a kind of Mexican taco with meat and cheese, which in the embodiment of Okinawan cuisine is served not in a tortilla, and as a topping for rice. These and many other dishes can be enjoyed in local pubs, Isaac. 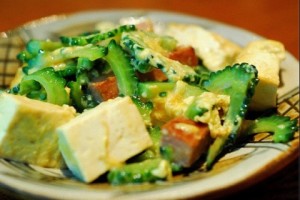 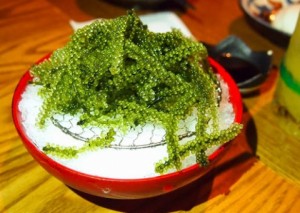 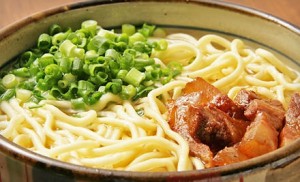 The island of Okinawa.

The island of Okinawa or Okinawa- hontō is the largest and most populous in the prefecture of the same name. Naha City in the southern part of the island is the main transport hub in Okinawa, from where you can reach many other cities and islands of the archipelago – either by plane or by ferry. The most urbanized part Honto – central, while the northern region is relatively uninhabited and retains its natural landscape. The main cities of the island are considered to be the capital city of Naha in Okinawa, Nagoya and Okinawa City.

Sightseeing and shopping locations on the island can be divided into groups depending on their geographic location.

The center of Naha:

Kokusai-dori, and Kokusai Street (国際 通 り) – the main street of Naha, a length of about 2 kilometers, and shopping area: it stretches along a long chain of clothing and gift shops, hotels, restaurants. Makishi grocery market is also on this street with restaurants on the second floor.

Museum of Ceramics Tsuboya (壺 屋 焼 物 博物館) – is located in Tsuboya, here you can get acquainted with the history of pottery in Okinawa and learn about pottery technique All explanations in the museum on the Japanese, however, have the opportunity to purchase a comprehensive guide in English Adjacent.. pottery shops.

Okinawa Prefectural Museum and Art Museum (沖 縄 県 立 博物館 · 美術館) – Okinawa Prefectural Museum provides an excellent opportunity to learn more cultural and historical facts about the area as part of the permanent exhibition. In the second museum exhibits works of both classical and contemporary art, ranging in type from sculpture to video and sketches.

Shuri Castle (首里城) – castle, situated in the district of Shuri, Naha city, the former residence of the rulers of the Ryukyu government. The castle has a beautiful park. Included in the list of World Heritage by UNESCO. 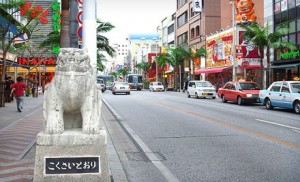 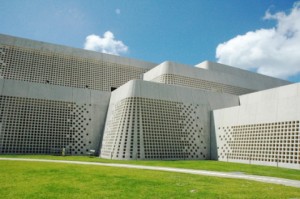 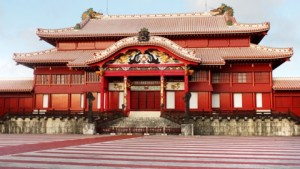 «Ocean Expo Park» (海洋 博 記念 公園) – a beautiful park on the shores of the emerald ocean. The main attraction – Churaumi Aquarium of the Pacific, located in 4-storey building in the tanks which you can see the deep-sea creatures, whale sharks, rare tropical fish and coral reefs samples.

Botanical Gardens South-East (東南 植物 楽 園) – the largest park of tropical plants in Japan. The garden features more than 3,000 views of tropical flowers, 100 plant species, 200 species of fruit trees from around the world. The perfect place for walks and picnics.

Murasaki Mura (む ら 咲 む ら) – theme park, where the tourists have the opportunity to feel like a small village with traditional houses of times Ryukyu state. Visitors can also try his hand at various crafts – pottery, glass-blowing, creating musical pendants made of shells – in a specially recreated village workshops.

Cape Manzamo (万 座 毛) – Rock, located near the village of Onna. It offers one of the most beautiful views in Japan, in connection with which Manzamo cape is a popular tourist destination – among both Japanese and foreign travelers. Great place to watch the sunset. Nearby are several public beaches.

Cape Hedo (辺 戸 岬) – another vantage point, which offers a fantastic view of the Pacific Ocean and the East China Sea. 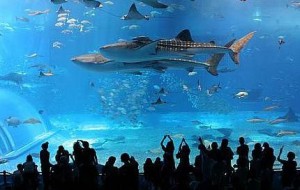 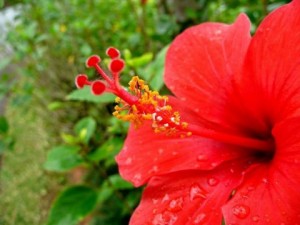 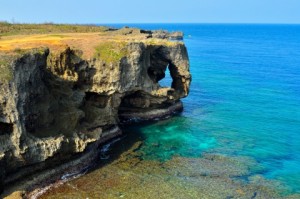 The world Okinawa (お き な わ ワ ー ル ド) – theme park with recreated Okinawan village. Here you can see the ancient culture of the island in all its manifestations – folk dancing, demonstrations of folk arts and crafts and even try his hand in a particular craft. One of the main attractions of the village is a stalactite cave Gekyusendo, which is considered the longest in the whole East.
Peace Park and Himeyuri Monument (ひ め ゆ り の 塔) – here it is over the famous battle of Okinawa between American and Japanese forces.One of the main attractions of the park – World Museum, where visitors can learn more about the battle and the subsequent restoration of Okinawa. The park also is “The cornerstone of the world” with the engraved names of the fallen in battle, soldiers and civilians. A few kilometers west of the Peace Park is a monument Himeyuri, established in memory of the dead schoolgirls designed to war as nurses.
Sefa-Utaki (斎 場 御 嶽) – one of the sacred places of Okinawa, is a triangular mainsail mountain formations. Once it took san priests ryukyusskie.Sefa-Utaki called the place where you can be alone with yourself and think about your life. 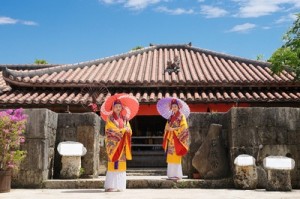 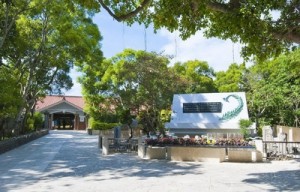 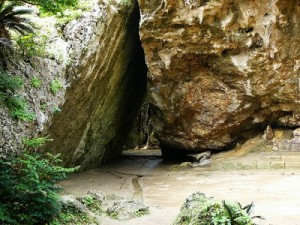 The ruins of the castle Zakimi (座 喜 味 城) – one of UNESCO World Heritage sites. The castle, built in 1400, the rulers of the Kingdom of Chūzan, served as a defensive structure against the rebels. Now the whole of it were only the walls, from the summits of which visitors can have a good view of the surroundings. Nearby is a museum dedicated to the life and culture of the people once existed.

Residence Nakamura-ke (中 村 家 住宅) – home of the XVIII century, built in a traditional style. He once served as the residence Nakamura family.Nakamura-ke has retained many features of the ancient Okinawan wealthy homes, as, for example, red-tiled roofs, statues Shysa guarding the house from evil spirits, and tall trees to protect house from typhoons.

The ruins of the castle Nakagusuku (中 城城) – one of the castles times Ryukyu state. It was built in the XV century as a defensive fortress commander Gosamaru. Now from the construction leaving only ruins, but they are still distinguishable features separate forts that made up the castle.

Mihama American Village – located in Chyatan in Mihama district, close to US military bases, and is a large entertainment complex in the open air. There are a large number of shops selling clothes US brands, as well as a lot of different cafes, which serve American hot dogs and hamburgers. 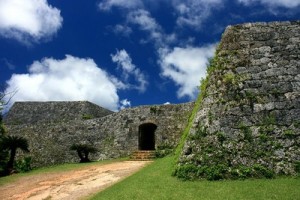 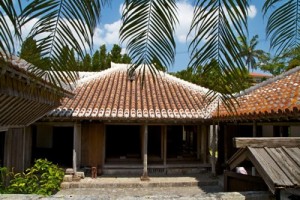 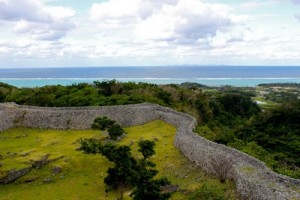 The western part of the island ideal for beach lovers as well as fans of diving, snorkelling and other water activities. In addition you can book a private tour to the shores of the neighboring islands, where are the best places for diving.

As regards local transport, the island operates a bus service – a big bus terminal is in the city of Naha near Kokusai-dori. However, keep in mind that there are no English signs, but if you plan your route in advance, problems with movement should not be. Some coaches, like, for example, following up the World Museum or aquarium can be quite rare, so the waiting time of the bus may be about 2 hours. In addition to the bus, on the island there is a monorail line, however, for a day of sightseeing, it is unlikely to work – it’s best to use it to return to the Naha airport. A more expensive option of transport – taxis, which are on the island very much. It is possible to call a taxi at any point, some companies even provide English-speaking drivers for foreign tourists and excursion programs.