Wonderland of Nikko Edomura the Edo – theme park in g.Nikko, where all the details of life represented the provincial town of the Edo period.At 500 thousand sq. Km settled homes, modest hut, samurai residence, traditional theaters, the village of ninjas, and many other old buildings.The main highlight of the park – a theatrical performance, which plays the park staff: everyone here plays the role of a villager, whether it is a samurai or a poor merchant, and each has its own peculiarities of behavior and manner of speech.

Guests can start their journey with putting on Japanese kimono (which can be rented in the park), and then take a sightseeing walk: try your hand at shooting a bow or throwing shuriken, go to one of the many theaters in the classical Japanese performance, try not to get lost in a maze of ninja and buy souvenirs in the authentic shops. 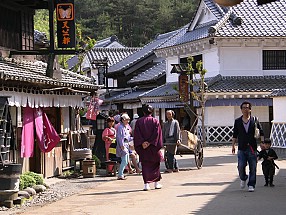 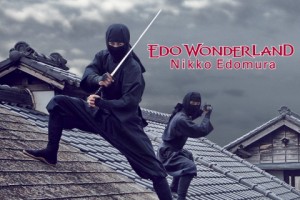 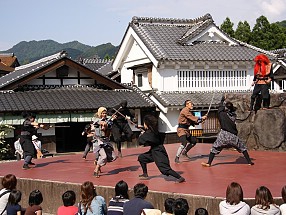 The park is a large number of various cafes and souvenir shops, where you can buy a souvenir of the wonderful world of Edo original teapots, prints, replica of the traditional weapons. The Armory of the village and the Forge of  souvenirs will not be able to find, but these places are interesting for another reason: they completely recreated the situation of real workshops of the Edo period. But to see the blacksmith’s arms “in action” can be in two wax museums in the park – ” Prison Kodemantё”  and ” Residence Kira-Kozukenosuke” ,  which, incidentally, are not only battle the staging, but also scenes of prison life and the bloody retaliation.

Among other interesting attractions are noteworthy , “Temple with ghosts” , where visitors will be carefully frighten Japanese spirits and demons, as well as the “House of illusion” , which is a feeling that the walls are tilted, and gravity loses its power. One of the best attractions of the park – almost insurmountable “Labyrinth Ninja” , made ​​in a full human growth.

And, of course, visitors to the park Edo Wonderland should visit one of the views held in the local Japanese theaters. You can choose a comedy show, magic tricks and spectacular martial representation of « the Grand the Ninja Theater then ».

On Wednesdays (except public holidays and school holidays)
from 8 to 21 December.

From Asakusa Station in Tokyo by express train go to station Kinugawa Onsen (Line Tobu Nikko). Check in which direction the next train: The final station is to be Shin-Fujiwara, not the Tobu-Nikko.

Also, between the stations of Nikko Edomura and Fujiya Kanko Center (station next to the Temple in Nikko Tosegu) operates a free shuttle.Departures – 4-5 times per day. The trip takes 35 minutes, some shuttles stop on the way from the station JR Nikko.

WARNING: travel costs not covered by the JR Pass.