Park Dzigokudani (translated as “Hell’s Valley”) – home of the famous snow monkeys, located in the valley of the river Yokoyu. Despite the harsh climate (snow in the valley is held 4-5 months), steep and dangerous cliffs and a large number of active hot springs, is a paradise for Japanese macaques, which the park is home to over 200. The fact that the Japanese macaque love to swim in warm water basins of sources. Watching the snow monkeys in the “swimming” season has become quite popular activity among tourists from around the world. For professionals – researchers and photographers – a unique opportunity to observe the Japanese macaques near and study their habits. 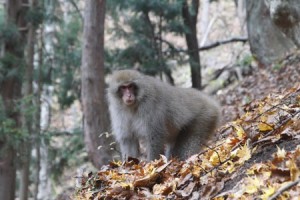 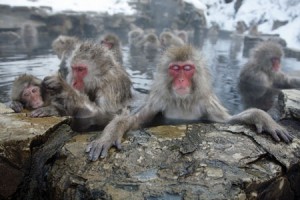 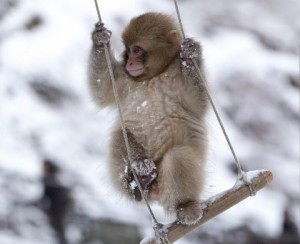 Immediately after entering the park, visitors enter one of the onsen (in this case, artificial). Monkeys bathing in a bath quite often, they are not confused by the presence of people around and camera flashes. However, animals can not be touched.

Although the park is open year-round Dzigokudani, monkeys bathing in onsen only during the winter season – so they protect themselves from the cold. Naturally, in the spring and summer months macaques do not need a warm bath. “Vanny” season begins around the middle of November, beginning of December.

By the way, on the opposite bank of the river is Yokoyu ryokan Korakukan – one of the oldest in Japan. Here visitors can park residents Dzigokudani like to spend a few hours in the hot tub (but only other people in the community). 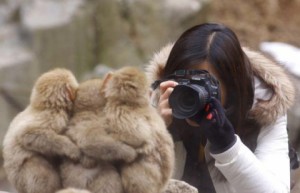 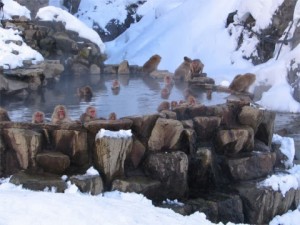 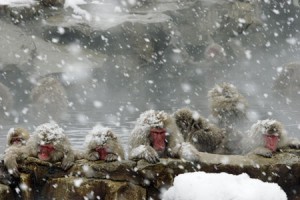 It is important to keep in mind (information from the official park website):

Monkeys living in the park – wild animals, so for the sake of their common security and visitors should observe the following rules: 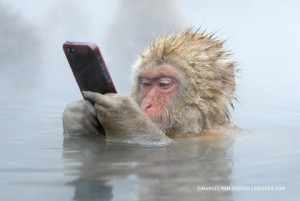 ※ Please do not besopokit other visitors.
Just ask you to treat the monkeys park and their home with respect.

Title: Monkey Park Jigokudani yaen-koen
Address: 6845 Yamanouchi-machi Shimotakai-gun Nagano Japan 381-0401
The park is open from 9:00 to 16:00.
How to get from the city of Nagano: Express bus Nagaden from Nagano Station (stop number 3 at the eastern exit route Shiga-Kogen Line) to the station Kanbayashi Onsen-guchi (40 minutes, 1400 yen one way). Buses to the seasons go from 4 to 10 times a day. Park Jigokudani Monkey Park is within walking distance from the station.