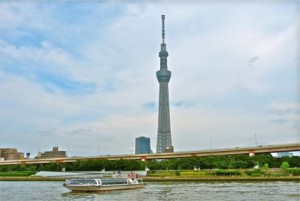 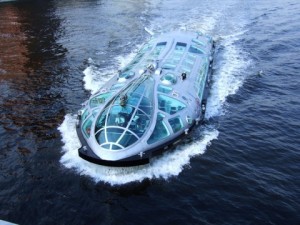 In Tokyo, there are several ferry companies, through which tourists can travel around the city, not only on trains and subways, but also take a cruise on the Sumida River. With the water bus is convenient to visit the artificial island of Odaiba in Tokyo Bay, and entertainment district of Ryogoku. Routes most water taxis run along the Sumida River, one of the city’s most famous rivers. Most of the water taxis represented the Tokyo cruise company.

Route Asakusa-Odaiba Direct Line (50 minutes on the road, the cost – yap.yen 1520) is one of the most popular routes. The route runs Himiko boat with panoramic windows. Water Taxi that route does not work on the second Tuesday and Wednesday of every month (except – August).With the help of a taxi Sumida River Line route you come to Asakusado Hama Rikyu garden (in the way of 35 minutes, the cost – 720 yen Jap.).Jetty on Hama Rikyu Garden is located on the territory garden entrance fee, so when landing at this stop will need to pay the entrance to the garden (300 yap.yen).  A detailed schedule and routes can be viewed on the company website http: //www.suijobus. co.jp/

Route Mizube Cruise Line will bring you out of the area on Ryogoku Sumida river about. Odaiba (the way 1 hour, the cost – 1100 yap.yen). Taxi makes a stop in the gardens Hama Rikyu. Entrance to the garden for an extra charge (300 yap.yen).

Detailed schedules and routes can be viewed on the company’s website http://www.tokyo-park.or.jp/english/

In Tokyo Bay just go cruises with lunch or dinner. By the time these cruises take about 2 hours. Prices depend on the food and usually ranges from 6,000 to 15,000 Jap. yen.