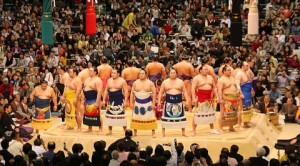 Sumo – the national sport of Japan. It originated in ancient times to entertain the Shinto gods. Many rituals with religious overtones, such as a symbolic cleansing of space combat salt, still exist. In accordance with tradition, only men engaged in professional sumo in Japan.

The rules are simple: the wrestler who first goes beyond the boundaries of the ring or touches the ground with any part of the body except the soles of the feet loses. Golf sumo wrestling is a square platform in the 34-60 cm in height, called the dohyo. Doha is made of rammed clay and a special kind of topped with a thin layer of sand. The fight takes place in a circle with a diameter of 4.55 m, the boundaries of which are laid special braids of rice straw (ie. N. “Tawara”). two white stripes, indicating the starting position of the fighters are located in the center of Doha.Sand around the circle carefully leveled brooms before each bout, to the footsteps in the sand you can determine whether one touched the ground outside the circle of contenders. On the sides of the dohyo in the clay in several places made a step to the fighters and gёdzi able to climb it.

The very ground and a lot of items around her full of Shinto symbols: sand, which covers a clay dohyo, symbolizes purity; tossed with salt symbolizes the cleansing, the expulsion of evil spirits; canopy over the dohyo (yakata) is made in the style of the roof in the Shinto shrine. Four tassels on each corner of the canopy represent the four seasons: white – autumn, black – winter green – spring, red – summer. Purple flags around the roof symbolizes the drift of the clouds and the change of seasons. Judge (gёdzi), among other duties, serves as a Shinto priest.

Sign in Doha for women in ancient traditions banned.

The fight lasted only a few seconds, but in rare cases it may take a minute or more. In professional sumo no weight classes, so one of the determining factors is the weight of the fighter. 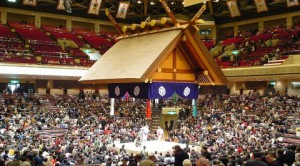 The only clothes fighter during the bout – a special zone called “mawashi”. This dense wide fabric belt, often dark shades. Mawasi is wound in several turns around the naked body and between the legs, the end of the belt is secured behind a knot. Mawashi unwound leads to disqualification of the fighter. At a high-level fighters silk mawashi. By the belt hung hanging ornaments – “Sagar”, do not perform any other function other than purely decorative. In the two top division wrestlers, there is another, special, kesё belt-mawashi, looks like a decorated sewing apron, everyone – in his own way, which is only used in the rituals. 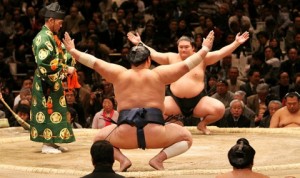 The hair gathered in a special traditional bun on top, in the two top divisions hairstyle performed significantly more complex. In addition to beauty, this hairstyle has the property to soften the blow on the head, possible, for example, when falling headlong.

Clothing and hair style wrestlers is strictly regulated and out of competition. The requirements are very dependent on the level of fighter.

Official tournaments professionals (basho) held 6 times a year, in Tokyo (January, May and September) and once in Osaka (March), Nagoya (July) and Fukuoka (November). Basho starts, as a rule, on the second Sunday of odd months and lasts 15 days. Between tournaments, wrestlers participate in various outreach and charitable demonstration tournaments.
The best way to see this is to visit the sumo sumo tournament. Tickets are available for each day of the 15-day tournament. The three types of seats available for spectators: at ringside Places: The most expensive seats that are close to the ring. The audience sit on cushions on the floor. It should be borne in mind that due to the proximity to the ring, there is a risk of falling fighters on the ground. Boxing place: First floor of the stadium consists of blocks of seats in the Japanese style, which usually accommodate four people. The audience sit on cushions, you must take off your shoes. Tickets are sold as a unit. Places on the balcony: . On the balcony of the second floor, there are a few series in the Western-style tickets sumo go on sale about a month before the start of each tournament. 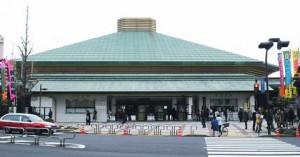 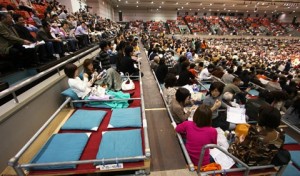 For those travelers whose travel dates in Japan does not fall on the sumo tournaments, too, have the opportunity to see Sumo. Often held demonstrations tournaments between official tournaments. Schedule demonstration tournament can be viewed on the official website –http://www.sumo.or.jp/en/jungyo/schedule

Tokyo District – Ryogoku, sumo is a center for the past 2 centuries.
This area is home to many fighters, as well as here is the Kokugikan stadium (Kokugikan), which are held three of the six tournaments in Sumo year. 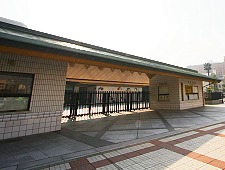 Sumo Museum.
Opening hours: 10:00 to 16:30
Closed on weekends and national holidays.
Admission is free.
This small museum is located inside the Kokugikan stadium. There are exhibitions of sumo, including can see a collection of portraits of
past and current yokozuna, photographs of significant events in the history of sumo. During tournaments, the museum is only available for owners of
tickets. 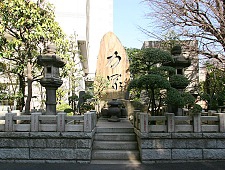 Temple Ekoin.
The first sumo stadium was built in 1909, sumo tournaments were held outdoors in Ekoin temple, situated a few
minutes’ walk from Ryogoku Station. Today, visitors can see the temple stone monument on the grounds of the temple, which glorifies the past
sumo wrestlers. 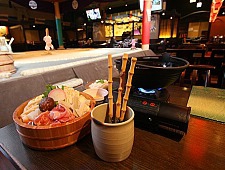 Restaurants Chanko nabe.
Chanko nabe – main dish of sumo wrestlers. The dish is a hot dish, which consists of a variety of meats,
seafood, as well as vegetables.
In the Ryogoku district a lot of restaurants where you can try Chanko nabe. Many of the restaurants are owned by former sumo fighters.

PREV：
Who are the geisha?
NEXT：
Temple hotel Syukubo