Anime – an integral part of Japanese culture. We offer you a list of the main attractions of a classic anime and manga culture: 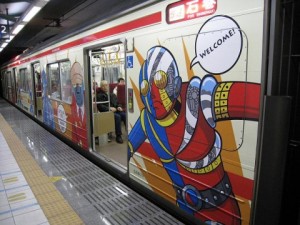 In the city of Ishinomaki was born the famous mangaka Shotaro Isinomori – author of comics as the Robocon, Cyberg 009 who do you fight for ?, Masked rider. As a tribute to the merits of a famous artist Ishinomaki Station was renamed the station Ishinomaki Manga. From the exit of the station is Mangovskaya road directly to the Museum Mangattan – and along the way you will meet the monuments dedicated to the many well-known characters from the works of Isinomori. By the way, the train Mangattan Liner I and II to JR Senseki line Robocon decorated in style. 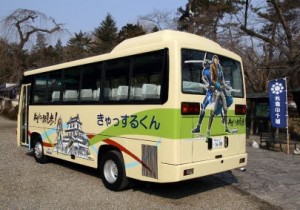 Sengoku Basara: Samurai Kings – anime adaptation of the popular series of games in the genre of action. The series appeared in 2009 and in no time gained worldwide popularity. Among the most ardent fans it is especially important to visit places where supposedly met and fought the heroes of anime. One of the serial battles took place in the city Siroisi, which historically was a stronghold of Clan Kotakura head – rind (in Sengoku Basara, he is also present). Therefore, the city has a city tour bus network specifically for fans of the series – on the facade depict characters Sengoku Basara, so you definitely know them. Do not forget the souvenirs.

Cities and Waseem Satti – the world of Lucky Star 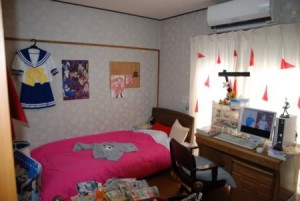 The incredible popularity of Lucky Star has meant that fans literally occupied the city and Waseem Satti, which allegedly events occur manga and anime series. The author of the manga – Kagami Ёsimidzu – spent all his childhood in Satta, and now it is an old house converted into a Lucky Star Museum, which includes a gallery, several permanent exhibitions and recreated the room of the protagonist – Konate Izumi. And in the city Wasim is Shinto shrine, where the plot of the manga twins worked Hiigari. 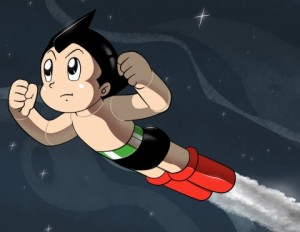 PHRI – hometown Osamu Tezuka, the author of the manga Astro Boy. Comics robot Astro tell about that experience human feelings. He helps people and is looking for a balance between the robot and the existence of human life.Since then, like Astro Boy anime it appeared his in 1963, the character has become a favorite of millions. Astro has even been awarded the status of honorary citizen PHRI. 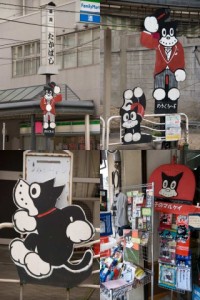 Comic Norakuro – comics, published from 1931 to 1981 and tells about the adventures of dog Norakuro and his dog team.. Later, the manga was adapted to anime. Norakuro Manga manga contributed to the development of culture in general and remains popular as the Japanese and foreign judges to this day. Fans should visit Takahashi on a shopping street, also known as the Norakuroud – it is decorated with multiple images of manga characters. By the way, on the street you can get to Takahashi Manga Museum Norakuro. 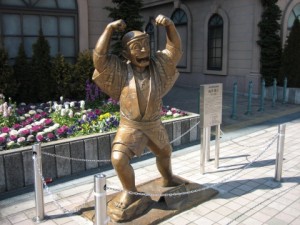 Kochira Katsushikaku Kameari Kouenmae Hashutsujo – classic comedy sёnen manga. The comic tells the story of the life and work of elderly police Kankiti Ryotsu. A popular manga was so high that in addition to the traditional anime series out live-action film, 2 animated full-length works, and even put some plays. Three statues of the hero can be found on the street Kameari (District Katsushika) – bronze were sealed adult Ryotsu, Ryotsu child, and Ryo-san in a traditional costume festival. The character is so well known and popular that it is often possible to see the image on flags district maps for tourists and souvenirs, which, incidentally, can be purchased at Kameari street. 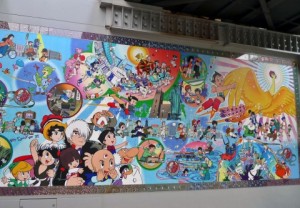 Studio animation Osamu Tezuka, the author of the famous Astro Boy, is located in the Tokyo area Takabanobaba.Admirers of Tezuka can find outside the station Takabanobaba, JR Yamanote Line, a large-scale art, where all the famous manga characters depicted. 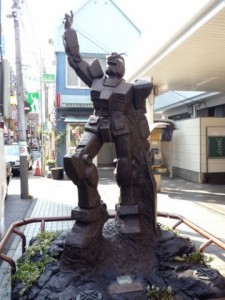 At the exit from the station Kami-Igusa, Seibu Shinjuku Line, is a bronze statue of the “Mobile War Gundam.” The fact that the area is Kami-Igusa studio Sunrise, producing the anime Gundam. This is one of the largest animation companies in Japan, which account for dozens of successful projects such as the «Inuyasha» and «Code Geass».

Tokyo – the conductor of Galaxy Express 999 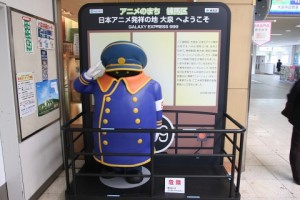 Galaxy Express 999 – 1978 animated series of Toei Animation, the film adaptation of the manga of the same name of the author Leydzi Matsumoto. The Galaxy Express tells the story of a boy and girl Tetsuro Meytel who travel through the worlds on the Galaxy Express 999. Statue of a permanent character stories – the conductor of the train – the station is Seibu (closest to the Toei studio), where he was “officially” awarded the title “Honorary ranger station. ”

Tokyo – Yoka Kitaro from the cemetery 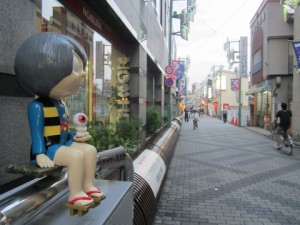 «Ge-Ge-Ge no Kitaro» – mystical comedy manga author Shigeru Mizuki, tells the story of the Japanese spirits Yoka, their adventures and relationships to human society. five anime series was released on the basis of a comic book.Statue of the main characters of the series – Yoka-boy Kitaro and his father (who was incarnated in his son’s eyes), is located in the Tokyo shopping street Tendzi-dori. 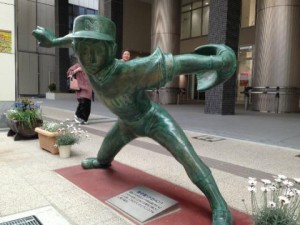 For forty years, Shinji Mizushima draws manga about baseball. Among the most famous of his works – Abu-san, Dokaben, Yakyu-kyo. Many of his characters Mizushima created with real baseball players, and now the heroes of the series can be seen in the author’s hometown of Niigata, on the street Manga, in the form of bronze sculptures. 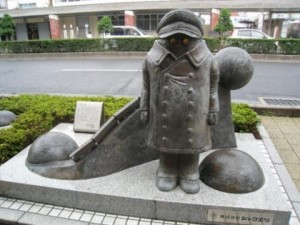 Along the symbolic street in the city of Tsuruga (which starts from Tsuruga Station) are 28 statues of the heroes of manga and anime like Space Battleship Yamato and Galaxy Express 999. Some monuments are whole scenes coming one after the other in chronological order. In the past glory of Tsuruga I had a major shopping city, but now tends to develop as a science center and heroes Battleship Yamato and Galaxy Express 999 have become symbols of the future. 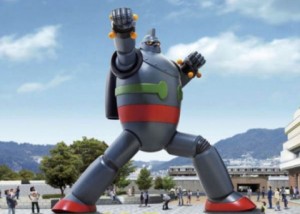 In Wakamatsu Park, which is just a five-minute walk from JR Shin-Nagata, is the 18-meter statue of Iron Man from the eponymous manga Mitsuteru Yokoyama – or Tetsujin 28-gō (1955). On weekends, there are going to fans of the manga series and animated series, released in 1963 (especially among fans of many members of the older generations). 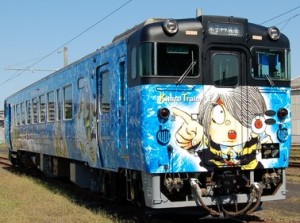 In the hometown of Shigeru Mizuki, the author’s mystical comedy manga Ge-Ge-Ge no Kitaro about spirits Yoka were installed statues of heroes of comics – as a tribute to the famous mangaka. Moreover, at the moment at JR Sakaiminato Line trains decorated in the style of manga Ge-Ge-Ge no Kitaro, called Kitaro, Nezumi Otoko, Neko Museum and Medama Oyaji. 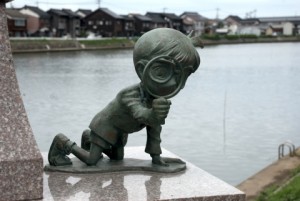 Hokuey – hometown manga Gosё Aoyama, author of comics Meitantei Conan, or “Detective Conan”. This is a story about the genius detective, a teenager who because of the machinations of the Black Organization turns to the child, but retains its identity and detective skills. He calls himself Conan Edogawa, enters the junior school and begins to look for a way to do away with the Black Organization. In honor of the famous detective in the town of Conan Hokuey bronze statues were installed, as well as the named street, which connects the JR station and track Yura Japan National Route 9. 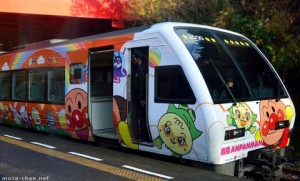 Anpamman – a fighter for justice, carrot superhero. Anpamman enjoyed great love and popularity among many generations of Japanese people who have grown up on tales of talking bun. In honor of the author, Takashi Yanase, who was born in Kochi Prefecture (the southern coast of Shikoku), in the main w / d in the region train lines were launched in style Anpamman (line JR Shikoku Yousan Line, Kotoku line, Tokushima line). Images of stick-hero can often be seen on the intercity buses in the region and at the station Shikoku sold a variety of souvenirs and flour products. 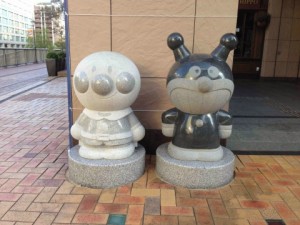 In Nankoku city, in the shopping district Gomen-machi, there is a street named in honor of the author of the legendary Anpammana – hero-stick of fairy tales. Moreover, along the street to the delight of locals and fans Anpammana exposed stone statues Yanase 7 characters, including himself Anpamman baker Uncle Jam, the main villain Baikimman and Dokin-chan, Melonpanna, Sёkupamman, Karepamman. 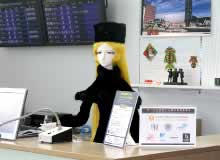 Robo-Meytel copy of the manga and anime series Galaxy Express 999 welcomes visitors in Kitakyushu airport. Past you will not pass – Meytel stands behind the information desk at the entrance to the city, and by the way, the robot can talk through the microphone.