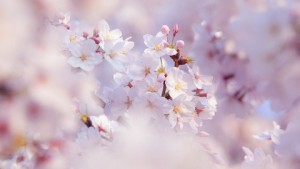 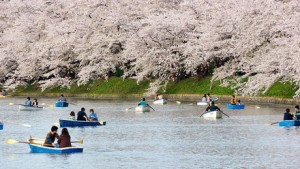 Hanami (Hanami; 花 見) – a Japanese tradition of admiring the flowers. Initially devoted Hanami plum blossom, but eventually the word came to mean exclusively admiring cherry. Sakura season can start from late March and end in early May – the exact dates vary from region to region, and other factors. The exception is Okinawa, where the cherry blossoms are usually in early February. cherry blossom lasts about 2 weeks, and many of those who wish to participate in Hanami, picnics in the parks under the flowering trees. Especial popular place near the temples, castles and shrines – the natural beauty of the cherry in combination with artificial ancient creatures looks very impressive. Hanami can be just a walk in the alleys along the cherry, though perhaps it is not so exciting.

Admiring cherry blossoms at night is called Yozakura (Yozakura; 夜 桜), which means “night cherry”: Visitors can admire the cherry, illuminated by paper lanterns. Evening Hanami is held in many places, for example, in the Ueno Park or River Meguro, Tokyo. 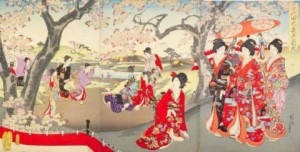 It is believed that the tradition of admiring cherry tree has a long history, has its roots in the Nara period (710-949 gg.): Noble aristocrats found great pleasure in the Hanami and inspired by natural kinds, sang of cherry blossoms in the poems and poems. Today Hanami – a national event, so popular that some particularly popular places contests in parks.

Hanami has its own rules for a picnic should borrow in advance (preferably before 8 am) – is usually enough to put blue plastic mat in your chosen area, no one will take your place. But it is worth remembering that not everywhere has a cherry, it is possible to arrange a picnic – we must first make sure that the area is open to the public. In the stores, “100 yen shop» You can find everything you need for a picnic, and department stores such as Isetan Shinjuku and Daimaru Tokyo to buy a holiday-hanami bento.

In addition to the picnic very popular festivals on the occasion of Hanami, a festival festive food, souvenirs and tea ceremony outdoors. Festival dates change every year, depending on weather conditions. 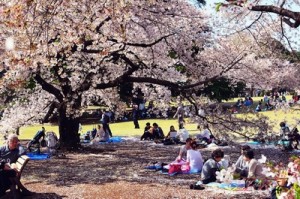 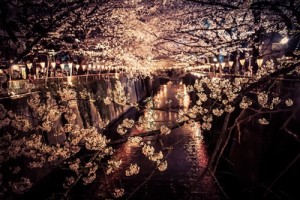 Places for admiring cherry blossoms there are so many. For example, in Tokyo are very popular Yoyogi Park (Park Yoyogi), Park Sumida (Park Sumida), Ueno Park (Park Ueno), Shinjuku Park (Shinjuku-Gyoen), Askayama Park (Asukayama Park), Park Inokashira (Inokashira Park) and Park Chidori-ga-fuchi (Chidorigafuchi) and on the River Meguro (Meguro river) you will have the opportunity to rent a boat and take a short cruise.

As for the other regions of Japan, the world famous is the area around the Fuji-pit – surely you do not just meet photos of the cherry blossoms against the backdrop of the famous mountains. Many of these images were taken from the northern shore of Lake Kawaguchiko (Kawaguchiko). In Osaka the best places for admiring the sakura – Park Kema-Sakuranomiya (Kema Sakuranomiya Park) and walkway at the Osaka Castle; Kyoto – “Philosopher’s trail» (Philosopher’s Path) and Park Maruyama (Maruyama Park). 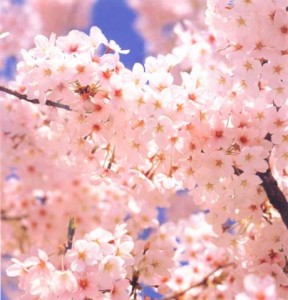 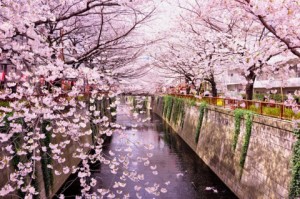