30 gifts, which is brought from Japan

Before the trip to Japan tourists often the question arises – what to bring home souvenirs from?
We offer you a list of things that you just have to bring from Japan. 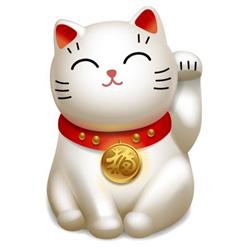 Everywhere in Japan, starting with shops and restaurants, and ending with the banks and offices, you meet the statue of “beckoning cat” or “happy cat”. This maneki neko – one of the most famous mascots that bring good luck. It is believed to attract good luck in your work and promotes prosperity.
Happy cats are also used to decorate the interior of the house, because the statues can be made ​​in any size and from any material. They can be purchased at any souvenir shop, but it is best to buy in Maneki-Neko Gotoku-ji temple, where once there was a lucky talisman. 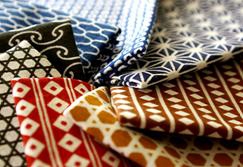 2. Tenugui is a rectangular piece of fabric with an ornament or a graphical representation

Tenugui – it is a rectangular thin cotton towel length of about 90 cm with a printed pattern of different motifs (geometric, floral or paintings ukiyo-e). It can be used as a towel, wrap gifts or to decorate their room as a tablecloth or panels.
Tenugui – one of the most popular Japanese souvenirs. It is so versatile that it is obviously «must have». 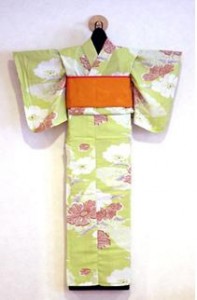 Yukata – it everyday light cotton kimono, which are often worn during summer festivals or in rekanah (hotel Japanese Style).
Tip:
Yukata are sold in all the souvenir shops, but if you want high-quality kimono, it is better to go to a normal clothing store or department store – there is more choice and higher quality of fabric. 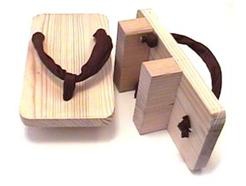 Yukata is usually worn with geta, traditional Japanese footwear that resembles both on flops and clogs. If the wooden geta – it’s too much for your delicate feet, you can choose zōri, a more formal and comfortable shoes, which also goes well with Kimono. 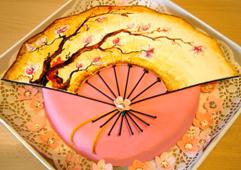 In the summer on Japanese streets, trains and restaurants, you’ll see a lot of people with fans. They can be folding (ōgi) or stiff flat fans (uchiwa). Hand fans are so popular in Japan that it is impossible to leave without taking with him even one. 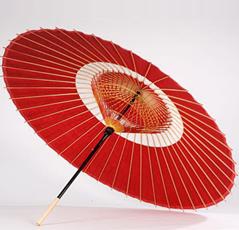 Japan is known for its ancient techniques as the manufacture of umbrellas, as well as specific ways of their application. Japanese umbrella is not only used as protection from the rain, but also during the tea ceremonies and theatrical performances. 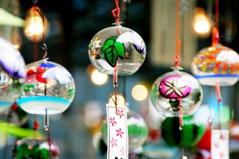 Sound furin – one of the most peculiar sounds that you hear in Japan, not only in the ancient temple premises, but also in modern buildings. Furin – is a glass or metal bell that is usually hung in front of the window or door.His sound on the wind announces the cool breeze. It is believed that the first furin bells originated in the Edo period. 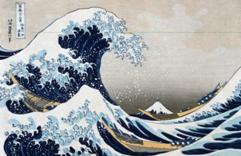 Depicting Bodhidharma (founder of Zen Buddhism), this doll is spherical, usually red, is an amulet of good luck, prosperity and power. Daruma traced sold without eyes, they should draw the doll owner: the first eye at the time of making wishes, and the second – when it is carried out. 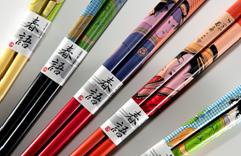 Japanese traditional sticks are made of lacquered wood, and may be of different sizes. Typically, different sticks for men, women and children. They differ from Chinese sticks – Japanese length shorter and more rounded in shape. The sticks are often sold in sets, and as decorative objects, they often have a beautiful ornament. This is a wonderful souvenir for those who love Japanese cuisine. 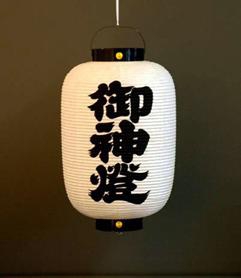 Paper lanterns made of Japanese washi rice paper, which is attached to a bamboo frame. This is the traditional method of illumination in Japan, you will find them everywhere – at festivals, parks, restaurants and hotels, as well as in homes. 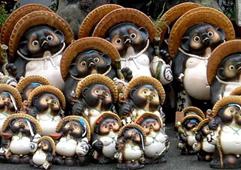 Raccoon – a traditional Japanese folklore character who has magical properties. Raccoons are considered to be pranksters and cheats who cheat like money. They are masters of deception and werewolves.
Statues of tanuki like Maneki Neko, to bring good luck and happiness, and often stand at the entrance to the shops, restaurants or at home. Even if you do not believe in their wonderful qualities, a great souvenir for anyone who loves Japan. 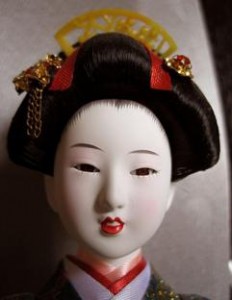 In any souvenir shop you will find a large selection of traditional Japanese kukol- of Hina-matsuri (doll for girls) to mousse-ningyo (dolls, soldiers). 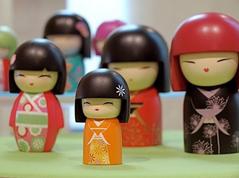 Kokeshi – traditional Japanese dolls, originally manufactured in the north of Japan. They are made by hand from different types of wood, they have a small and simple body without arms and legs and a large head. But it’s not just toys, and works of art that are considered great gift for both adults and children alike. 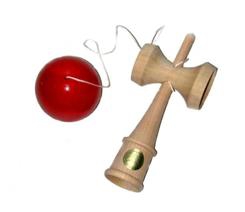 Kendama – a traditional Japanese toy, like a hammer, to which is attached a wooden bead on the thread. The idea is to catch the ball in the indentation on the wooden hammer, that is not easy. The toy is popular in Japan, and an annual championship on the game in kendama. The winners of these competitions are revered by the people for their patience and perseverance. 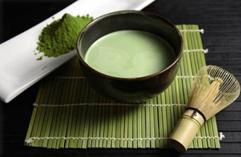 It is impossible to visit Japan and do not try real Japanese green tea. It is fundamentally different from Chinese green teas, has a mild astringent taste is not, and after brewing gets striking green hue. 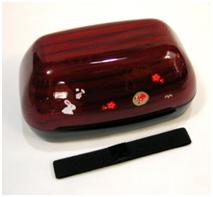 Bento – it’s ready to box with a dinner consisting usually of rice, fish or meat and vegetables. Bento boxes, made from lacquered wood, came about in 1600 and remain popular to this day. Bento became popular all over the world and now the wooden box lunch will be not only nice souvenir, but also useful in building the subject. 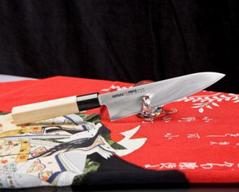 Another thing that definitely will serve in good stead in your kitchen – a traditional Japanese knife. There are two main types of knives: honyaki – made ​​from one type of material (vysokozakalennoy steel), but kasumi made ​​of two kinds of metal, as well as real samurai swords.
In spite of the manufacturing method, Japanese knives are considered to be the best kitchen knives, and each chef dreams of having at least one copy in his kitchen.

Replica samurai swords have to be in the list of souvenirs from Japan. Copies of the Japanese katana is made of different sizes – from small miniatures to full-length versions with lots of detail. 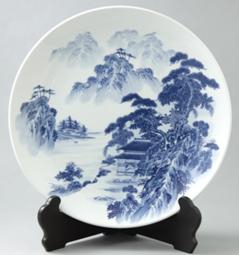 There are about 18 kinds of Japanese porcelain, some of which are still produced according to ancient techniques, while others are integrating modern technology and reproduce the Chinese counterparts. You have a huge selection to please their loved ones a wonderful gift. 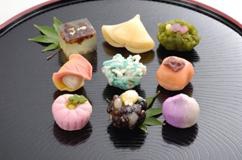 Japanese sweets – wagashi or – seem very special for many tourists, but their popularity is not harmful. Japanese sweets are made with sweet potato paste, rice, various herbs and tea. By their form, they can infinitely varied: patterned cookies or candies, in the shape of a flower or an animal. They may even seem very savory to people who are not accustomed to it, but its definitely worth a try! 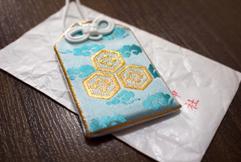 Mascots omamori – it’s amulets and charms, which are generally sold in the territory of temples and shrines.Each mascot dedicated to a particular deity – Shinto or Buddhist. According to the purpose are talismans to attract love, success in work, good luck for luring and affluence, for success, etc .. 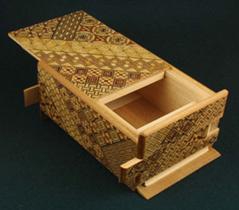 Magic Box (as it was nicknamed the tourists coming to Japan) – one of the most popular Japanese souvenirs, especially among fans of puzzles. Secret boxes such that it can only open the sliding part boxes in sequence. The simplest boxes open in the 3-4 shift, the average complexity – 20 or 30, and the most complex may have a combination of 120 shifts. 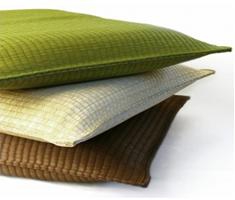 Tatami – mats of reed Igusa and rice straw, which traditionally veiled floors of rooms. But you do not have to live in this Japanese house to buy tatami. Recently, a lot of textile products, manufactured with the same technology as the tatami mats: pillows, rugs, coasters for cups and even slippers. So you have the opportunity to take home a small mat in form convenient for you. 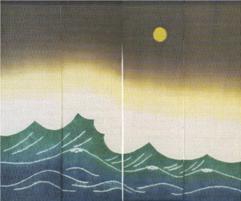 Noren – this is traditional Japanese curtains that often hang in front of the restaurants, family restaurants and shops. They used to serve as a protection from the wind, sun and dust, but now Noren used for decorative purposes. Sometimes Noren can be seen in Japanese homes – the curtains are used as delimiters rooms and how elements of the interior. Often, they are sold in souvenir shops, but they are not always to be found in the window. Therefore, specify the presence of curtains Noren sellers. 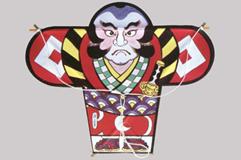 Once the first kites were introduced to Japan by Buddhist monks, and were originally used in religious rituals.Now kites – a fun and entertainment, they are often given to children on New Year’s.
Japanese kites are extremely colorful and are often manufactured in the form of various folk heroes and deities. 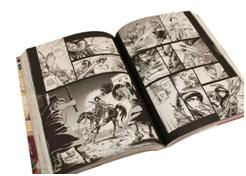 Manga – Japanese comics, popular not only in Japan but also won billions of fans around the world. One of the main features is that manga is read from right to left, as well as the fact that many comics are printed in black and white. In Japan, manga is read by people of all ages – comics vary by genre, age and many other parameters.Even if you do not speak Japanese, you will surely find curious contemporary Japanese animation, and if it is to your liking, you can take away with them a piece of it as a small (and very inexpensive) a volume of comics. 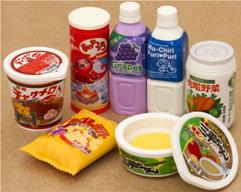 This is one of the most popular gift items exported from Japan. Japanese erasers are so elaborated that it seems as if in front of you real food in a nutshell: sushi, bento, packets of juice, noodles, miso soup, sweets and more.They differ as “edible” magnets, key chains, and even watches. 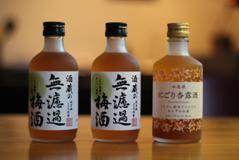 Japanese plum wine (to be precise, the plum liqueur) «Umeshu» is produced from fruits plums Ume. Due to the high content of fruit acids and minerals, plums “mind” is considered to be very useful for health. Cooked wine from it relieves fatigue and improves metabolism. 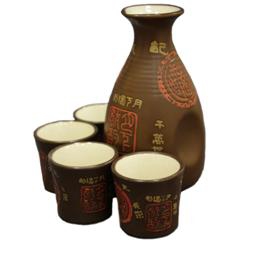 Set sake, consisting usually of a few cups and a small jug tokkuri will help you discover the true taste of Japanese alcoholic beverages – whether rice wine or plum wine. Traditionally, sake is heated by placing the jar in a bowl with hot water; narrow neck helps to retain heat. You will have the opportunity to try out this ancient technology in the home.