Tour of Japan: g.Kioto with Russian speaking guide for one day. 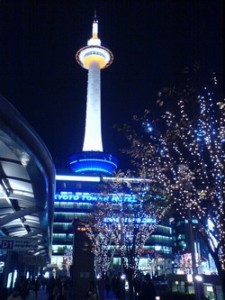 There are about 2,000 churches (17 of them under the protection of UNESCO), hundreds of parks and dozens of ancient palaces. You will see the real Japan with distinctive temples, ancient and beautiful, with quiet streets, which somehow did not seem to have changed for centuries.

During the tour you will see :

Kyoto Symbol –  “The Golden Pavilion – Kinkakuji”  This building appeared in 1397 at the behest of the shogun Ёsemitsu. The building is located on the shore of a small pond Kёkoti with clear water in which it is reflected on a clear windless weather. 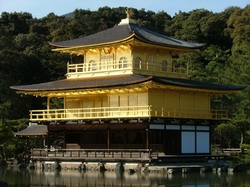 Kinkakuji  – the main Buddhist temple, the foundation of Zen Buddhism, which contains the relics of Buddha, covered in gold leaf. Golden temple roof is also covered with a very thin gold leaf.Next to the temple is growing pine, which several generations of gardeners shaped floating vessel.

Nijo Castle  – one of the Japan’s largest stone castles, the castle is an inner palace Ninomaru, famous for its unique system of singing floors – kind safety system. Built in 1603 and was the official residence of the first shogun of the Tokugawa Dynasty – Ieyasu. The castle is also under UNESCO protection.

Nijo Castle  – the focus of medieval Japan luxury. Taking photographs in many places of the castle is forbidden, so only on the spot to contemplate all the beauty of interior decoration of this masterpiece. In the garden of the castle there are no deciduous tree, according to legend, falling leaves reminded of the death of the shogun. 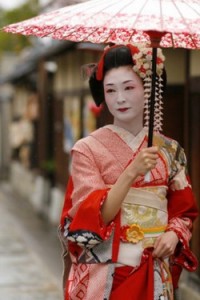 13:00  – Lunch. On the banks of the Kamo River in a cozy Japanese restaurant you can taste the house specialty Fried Eel, and a cup of green tea. From the windows to admire the views of the old town. Guides will help with a choice of dishes.

14:00 – Continuation of excursion . You will visit the  Temple Sanjo Sangendo  or “Temple 33 spaces” (also known as the “Temple of 1000 Buddhas” – named for the number of spans between the supporting pillars of the structure, symbolizing the incarnation of the Goddess of Mercy 33 – Kannon was built in 1164g..

In the cool depths of the temple lined up neat rows of  1001 goddess Canon , the most revered in Japan. In the center sits on a pedestal Odinnadtsatilikaya and thousand-Kannon, each of which has a palm-eye, which symbolizes the infinite possibilities of the goddess to save people and animals. In the manufacture of statues took 100let. Temple – a national treasure of Japan.

You will visit the   temple Kiёmizu-dera Temple  is located on the slopes of the Higashiyama (Eastern Mountain) was founded in the year 778. It got its name from the waterfall, the water that flows in its territory.  “Kiёmizu – a temple for everyone.” 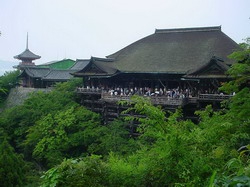 First of all,  Kiyomizu  famous for its unusual design: it stands on the slope of a high hill, and as it were “down” on the slope of its wooden piles, built without a single nail. On the territory of Kiyomizu-dera Temple are several buildings that are considered important cultural values. It is always crowded: because the water it confers health, longevity and great success in gaining knowledge. The balcony gallery offers spectacular views of the entire city.

The most lively hustle going on in Shinto joss  RS & S-jinja  (Jishu-jinja), which also belongs to the Temple. Among the many spirits who live here together, the most popular, perhaps, is the god of love Okoninusino-Mikoto (Okuninushino-Mikito). Young people are always crowds at the two “love” of stones, at a distance of 18 m from each other. If you walk with your eyes closed from one stone to another, there is no doubt that true love will come to you in the near future.

** The tour starts in g.Kioto.